The Sisyphean Torture of Writing an Unfinished Novel 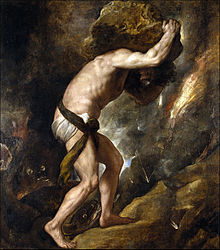 I don’t know how many journalists I have met who have said, “I’m writing a novel.” Maybe it’s like being a waiter who aspires to be an actor or screenwriter. Some occupations just blend like that.

Some may think that being a journalist is closer to a novelist than a waiter is to a screenwriter – but maybe not. The similarity between a novel and a feature article is about as far apart as a machine tool and a metal sculpture. All things being equal, a waiter has an interesting advantage over a journalist. Think of the aspiring storyteller who relishes different voices, personalities and mannerisms – all without the prejudice of a journalist seeking the truth (or whatever makes for truth these days).

Journalists – well, we can write some great narratives and we’re no slouches when it comes to sizing up those voices, personalities and mannerism. We certainly know what it feels like to pound down a thousand words in an hour. But in my opinion, we also carry within ourselves our greatest deficit: we are our worst editors. We creak with the burden.

How often I have scanned a batch of newly minted paragraphs that shimmered on my monitor and wondered if it was at all worth the effort. Fluorescent radiation licks the corners of my watery eyes; fingers drum impatiently on the keyboard – scanning, reading, editing, rereading, scanning and rewriting.

On a clearing of a workspace that barely accommodates my old stained keyboard and monitors, there are notes piled high amid the fragments of pistachio shells, wrinkled post-its, coffee stains, and tiny bits of my pride. These are my filaments: plot shards, dialogue ideas, character pivots all begging to be placed into something that makes sense.

I struggle to assemble this mess into a cohesive narrative. I am judge, jury, and executioner. It is my Sisyphean burden: what to keep, what to change, what to cut entirely, and what to rewrite. There are gaps between what I feel and what I recall; what I plan and what materializes. Things that I’ve read in a book and what I’ve dreamt bounce around my head like an antsy child waiting for desert.  When I’m not writing for clients, I force myself to write – anything. Just to write. In my idle moments, after too much coffee or one too many 16-hour days of work, I imagine my unfinished novels are like phantom bridges to nowhere. Oh, how my ambition deepens; to build the roads that will give them meaning.

There are times that I wish that I had written my manuscripts with ink and pen. At least if writing unfinished manuscripts ultimately killed me, there would be some evidence of a lonely toil to work toward some plausible end; covers that may explain to my wife and kids what I meant when I said I was working. Had I written them in ink I could point to the flotsam crammed on a shelf or a stack in a corner. Yet, for an unfinished novelist, how empty a gesture, how utterly unsatisfying.

An age ago, what a writer laid on a page was as permanent and indelible as the passage of time. One could edit in the margins, scribble out words or whole paragraphs, but the original act lay naked and visible. Dickens, Shelly, Keats, Hemingway, Poe and hundreds of other authors left ineradicable trails of ink that scholars study and peer into personal struggles. Researchers sort out and deconstruct the grail of the creative process like literary voyeurs. Sometimes they uncover intimate traverses of the author’s changing feelings and self-reflections. Frequently we discover hidden messages about an event or other frustrations the writer faced during the long process of building the story line. But I’m an unfinished novelist, who cares how many times I’ve changed?

With the intercession of the personal computer, most writers (unfinished and complete alike) opt for the ephemeral medium of word-processing for its incomparable convenience and privacy, but at a precious price. While writing remains an individual act of creation, a computer cheapens the output.  It’s so easy to alter or destroy what has taken hours to create. Those of us who are not yet novelists are often weakened by a lack of self-confidence and full grasp of “story”; we tend to be the most susceptible to tirades of overly capricious self-criticism and self-doubt. There it is… the delete key… a horrible weapon during moments like this. <click> The deed is done. Poor Sisyphus begins again.

It’s late now. Everybody in the house is asleep. I’m frowzy from hours of my self-inflicted, never-ending stone pushing. These are the times I am most prone to depression. I could sit here alone in my little enclave for several hours and listen to the voices of writers whom I admire, urging me to press on.

Once more, into the breech dear friend.

Sometimes I feel Jack Kirby’s presence hovering over me, reminding me of my promise to him and Roz. Sometimes, it’s Patrick O’Brian, quietly amused by his tea (who, by the way, wrote all of his novels in longhand). Once it was Robert Heinlein, cigarette aglow under an impatient brow. Some days I just imagine Harlan Ellison dropping by to accuse me of wasting his time (that actually happened once).

I chose the moniker “heavypen” to describe that “rough and all-unable pen” that Shakespeare exclaimed in Henry V. It occurs to me that the story Sisyphus may have been a creative reflection of this kind of struggle. Maybe the story of the ancient rock-roller was a writer who turned philosopher. Maybe the difference between a novelist who succeeds and one who fails is not measured by the effort expended, but the frustrations endured and conquered.

About: Ray Wyman, Jr is a content creator, communications professional, and author with more than 30 years of experience. Visit LinkedIN or Raywyman.com for more information.

Advice for the Fearful Blogger in a 3-Part Plan

Time to get over your fear of blogging. It's easier than we think: getting over fear. Good thing, too. While fear is the very thing that stops us ...

Confessions from a Failed Screenwriter

An old friend posted a photo on his Facebook page. The image was of me, Peter Burke, and Steve Werblun hamming it up during a break. My first ...

Some smart guy once said that “familiarity is the breeding ground of all contempt for the law.” Maybe it was Machiavelli. I believe that it also ...

Can Poetry Save the Earth? I was rummaging through some notes and rediscovered this wonderfully written poem called 'The Well Rising' by William ...

Reality of the "Creative Class": Outsourced and Outbid by Mediocrity

Led by cost-drivers and faulty notions of management, businesses abandoned the Creative Classes with hand-over-fist outsourcing. They discovered ...

The Joy of Chestnuts, the Pleasure of the Roast

About this time of year, it's Perry Como who takes me back to the happier days of my childhood. Specifically, Como crooning about the long tradition ...

My journey began with this website. Heavypen.com was my first website. I launched it in 1997. The pic on the right is as the site looked around at ...