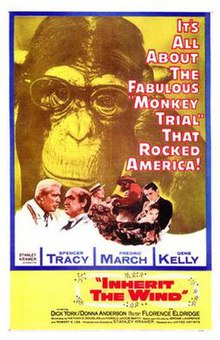 When man pits God against Darwin

Faith vs Science? Why do we have to chose? What’s really behind this struggle?

I just watched the 1960 film Inherit the Wind, directed by Stanley Kramer based on a play by Jerome Lawrence and Robert Lee. The story is the fictionalization of the 1925 “Scopes monkey trial” that pitted Darwin’s Theory of Evolution against The Bible.

The final scene is the big payoff for Atheists who love to point out what they believe is one of Christianity’s most significant flaws. However, in that one scene near the end, Spencer Tracy, playing the attorney who defended the teacher jailed for teaching evolution to his students, he picks up Darwin’s book in one hand and the Bible in the other. He holds them out as though to weigh them, then slaps both books together and slips them into his briefcase.

Rather than a definitive statement for Atheism, I believe the point of that moment is to illustrate that science and faith are not mutually exclusive for those who value both. The idea resonates for many Christians who look to their faith in Jesus Christ for personal guidance, yet accept science for an explanation of the external mysteries of nature. And why not?

Contrary to certain conspiracy theories (with a few exceptions here and there), most scientists do not go out of their way to use their work to invalidate faith be it the Abrahamic, Buddhistic, Hinduistic, or shamanistic. This was indeed the case for Charles Darwin who made substantial scientific contributions toward biological evolutionary theory, while he was still dedicated to his faith. It is true that he later declared himself agnostic; neither affirming nor denying Jesus Christ; and remained rather ambivalent despite the ideological tumult his name would later represent.

My own experience with scientists is chiefly with educators—many of them Christian or Jewish—who dedicate their lives to teaching at secondary and post-secondary schools. A few I have known were involved in research at post-doctoral levels: climatology, geology, marine biology, sociology, and astronomy. Out of a dozen or scientists/researchers with whom I am acquainted, only one was an avowed Atheist, and passively at that: the man usually never engaged in discussions about faith unless he was engaged, and only grudgingly.

However, among ardent believers I’ve met, mostly Christian, I have witnessed a thickening of minds. Not only do they cite the “evil intent” of scientists, but they say weird, reckless things designed to force people to take sides. As weird piles upon weird, a recognizable shape takes form; the argument suddenly makes sense. Christian opposition to science is writ large with the behavior of the Council of Cardinals during the so-called Galileo Affair. In the end, it seems, it was less about the heliocentric views promoted by Galileo Galilei and more to about the politics of the day. Galileo angered many people before and during the various inquests. People took sides and there was great intrigue in the court. In the end, Galileo suffered home imprisonment and lived to a ripe age of 77. Not at all what one might expect for a man who was condemned by the Catholic Church for acts of heresy. About 100 years later, the Italians erected a monument to Galileo within the holy walls of the Basilica de Croce. Then, in 1992 all arguments and accusations were rendered moot with a Papal apology.

My point, is not a recrimination of history, but to toss up a flag of caution for those who may be fooled into believing that they do God’s work by denying science. What if I said that God was the first physicist who created all the laws and mysteries that we’re only now beginning to understand? What if all the questions we have about God’s great creation leads to answers far beyond all the scientific theories we have today?

Some supporters of science have evolved their ideas into what can only be construed as faulty dogma—often mistaking scientific theory as empirical fact. By the same token (albeit the opposite side), faithful believers treat popular opinions as religious dogma and sometimes make up their own versions along the way. As examples: Darwinism, and biological evolution theory is not one and the same. Not all claims of Creationism is biblical (e.g., Young Earth). And of course, this is just the conflict over the origin of life on Earth. The arguments persist in simple concepts like the speed of light, the age of the universe, the nature of stars and planets, the number of planets in the universe, the possibility of life on other planets, climate change, and on and on. Take the one issue of the age of the planet. REAL scientists can’t decide if the planet is a few billion years old or the current estimate: 4.58 billion years old. It’s still a work of theory, of course. Planets don’t come with “date of formation” labels. Some Christians believe that Earth is less than 10,000 years old (or as young as 6,000 years). They base “young Earth” age theories on various references, none of which come directly from the Bible. Other than the 7 days of Creation itself, all estimates of the age of planet Earth is speculative at best.

Lessons can be learned from the “Galileo Affair.” Science enthusiasts, like the Catholic Church and Galileo’s supporters, like Christians blinded by nonscriptural apologetics, make the same error: they hold greater importance for the politics they chose to express rather than the substance of the discussion. The ensuing rhetorics between these parties has done significant damage to a civil and rational discussion. Emotion fills all the open spaces. The participants, can’t resist the temptation of rolling out serial proofs, most of which laced with unnecessary vitriol and tiresome contradictions. Nevertheless, on occasion, rational minds prevail and circle around to the idea that we must view science and faith with an open mind, especially where they appear to come at cross purposes. When they do, we find that the Bible seems to compliment many aspects of scientific theory (and visa versa).

For instance, I have found that description of God’s creation of the universe and the generally accepted theory of “big bang” appear to describe the same event. “Let there be light,” and BOOM, out pops every last grain of matter in the entire universe from a singularity: infinitely small, infinitely dense, and infinitely hot. The image brings out my science geek and my personal image of the hand of God reaching into the darkness to trigger the first move of all movements. When I hear physicists describe what came before—the alpha vacua (the original emptiness of space)—and how the one great singularity suddenly unpacked all of the matter of the known universe in a matter of SECONDS, and I hear the words of Genesis 1:

In the beginning God created the heavens and the earth. 2 The earth was without form, and void; and darkness was on the face of the deep. And the Spirit of God was hovering over the face of the waters. 3 Then God said, “Let there be light”; and there was light. 4 And God saw the light, that it was good; and God divided the light from the darkness. 5 God called the light Day, and the darkness He called Night. So the evening and the morning were the first day.

How exciting that science so perfectly fits God’s description of the first “day” of creation. Makes me wonder if there are other ways that science verifies Biblical truth. What of Adam? What of Eve? What of the miracles described in both testaments of the Holy Bible?

I write “a” conclusion because from this point, there can be so many. Let this conclusion be my most significant comment on this subject. We, as a family of believers, do not have to invalidate science to validate our faith. In my own adult journey into faith, I bring with me all the bits and pieces that I have read about scientific discovery. Is the universe more than 15 billion years old? I don’t know. However, it fascinates me that between the spaces and passages of time described in the Holy Bible, the possibility remains that the vastness of God’s creation is far greater than Earth itself. Truly, if Jesus is not from this Earth, then where is he now? On another planet somewhere out there, teaching again?

I most certainly agree with other apologists that there is no more need to demonize science than there is to impugn God (or the faith) for things that seem irrational to scientists (or the Atheists who love to pose as scientists). Preoccupied with what the sciences say about the natural world, many Christians miss what God says about His world. Do we need more “objective interpretation” to comprehend matters of our faith? I believe that we Christians should be wary of our urge to deconstruct everything in the secular world. If you need more than what has been given to you by Christ (Matthew 13:11), I suggest a reading of On Looking Into the Abyss, written by G. Himmelfarb, who warns about the danger of intellectualizing and deconstruction of art. What does God say about rationalization of faith? If we use our faith to rationalize our judgment of science, we diminish the church and ourselves. I wonder how God looks those who condemn others who have done nothing more than express an acute wonder and an ambition to to understand His greatest work?

The word Religion, is commonly defined from Old Latin, religare, “to bind,” or religio, “to obligate and revere. ” Yet, there are other related root verb combinations like relegere and relectio, to “re-read” or “re-consider.” I’m comfortable with all of these definitions. My faith requires that I study so that I may have greater appreciation for what binds me to this Great Earth. At the same time, I view every discovery and theory as an homage to God; another opportunity to express my deep appreciation and reverence for His work and sacrifice at the cross. Just as God has reason enough for all things, my faith stands on its own merit. Jesus doesn’t need my validation, and His grace stands apart from all imagination, with or without science.

Verdict & Reaction: Does God really need us to defend His world from scientists?

About: Ray Wyman, Jr is a content creator, communications professional, and author with more than 30 years of experience. Visit LinkedIN or Raywyman.com for more information.

Or what love isn't. Considering Apostle Paul's first letter to the Corinthians. Ever wonder what God intended for us to do through Love? Paul Simon ...

Is Your Free Will God's Will?

The bigger question for free will is, what's its purpose? Of course, we have free will - it's the source of humanity's greatness and its worst ...

Optimism: Acceptance of the Past; Mindfulness of the Present

The optimism I learned from Buddha, grows in my heart with Jesus. First, a little background. My father was a professed atheist. A smart man, but ...

Peace and grace be with you Snyder, wherever you are.

How a chance meeting changed my mind about how we find faith. I was driving a 24' truck filled with props for Anaheim Ballet's annual performance of ...